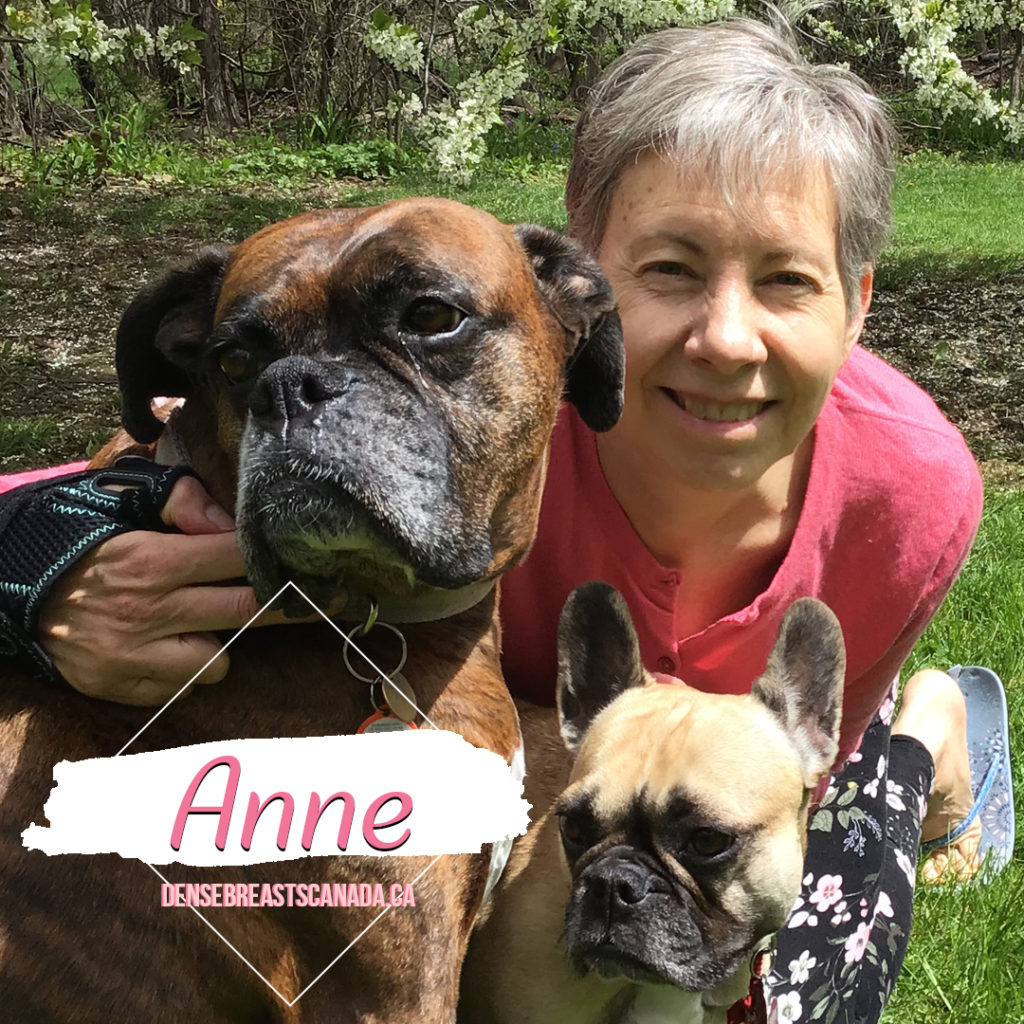 I was diagnosed with bilateral lobular breast cancer in May 2019, but my story starts long before that. I can’t turn back time, but I hope that my story will give other women information, the courage to ask questions and protect their health.
• In my 20’s I was diagnosed with fibrocystic breasts, meaning that both breasts were hard, lumpy and painful.
• In my 30’s I had several breast ultrasounds because of lumps and nipple discharge, with many calcifications still evident. I was told everything was fine, no cause for concern.
• In my 40’s I had mammography several times. Several large, painful cysts were aspirated … I was told that everything was fine.
• In my 50’s I had a mammogram plus ultrasound every year, given the cysts and calcifications in my breasts. At one visit the technician off-handedly mentioned that I had very dense breasts, something that no one had previously mentioned. Nothing was said about the fact that very dense breast tissue makes it difficult to accurately assess imaging; nothing was said about dense breasts being a risk factor for cancer in itself, or that I was at any increased risk of cancer. I was told everything was fine.
In 2019, at age 58, I went for my annual mammogram. I was called back for more mammography and ultrasound because the new radiologist who was covering in the screening program wanted to investigate further. No big deal, I thought; I’ve had ultrasound after mammography for years. Most often, imaging turns up nothing of concern. After the imaging, I was recalled for a biopsy to investigate further, but told not to worry. I had biopsies taken in both breasts. The results found multi-focal, stage 1 and 2 invasive lobular breast cancer (ILC) in both breasts. Both breasts!!! How could that be when I had gone for mammograms and ultrasounds as directed every year, had been followed for decades and everything was always fine?

I had a double mastectomy in June 2019. My surgeon said that there was no big rush to schedule my mastectomy because ILC is relatively slow growing; the tumors had likely been there for 8-10 years. Again, how could that be?! My ILC was estrogen positive, progesterone negative and HER2 negative. I had eight rounds of ACT chemotherapy in the Fall of 2019.
Sentinel nodes that were taken during my surgery had micro and macro metastases, and extranodal extension … the cancer was trying to break free of the lymph nodes! In February 2020 I had lymph nodes removed in my left arm pit, the side where macro-mets were found. All of the lymph nodes taken were positive for cancer. So much for catching it early! How could that be when I had been checked out every year?
In April-May 2020 I had 25 rounds of radiation across my entire chest and ribcage areas, plus my collarbone and shoulder on the left side where cancerous lymph nodes had been taken out.

In January 2020 I started hormone blocker therapy with exemestane aromatase inhibitor, to block the production of estrogen that fueled my cancer. I will be on this medication, with all of its side effects, for the next 6-9 years. There is no treatment that is specific to ILC at the present time, we just hope that the standard treatment works.

What I wish I had known:
• If I had known that dense breast tissue was an independent risk factor for breast cancer, I could have asked more questions.
• If I had known I was at increased risk for breast cancer, I could have pushed for biopsy of the cysts I experienced.
• If ”unusual architecture” had been explained to me, I could have advocated for more investigation and maybe caught my cancer earlier.
• I worked in the health care system for 30+ years and I had never heard of lobular breast cancer when I was diagnosed. I had no idea that breast cancer could present as anything other than a lump!
• I had no idea that lobular breast cancer is hard to find with mammography and ultrasound. If I had known about how sneaky ILC can be, I would have known to ask more questions and pushed for MRI to investigate.
If I had known these things my cancer might have been diagnosed years earlier, resulting in much less invasive treatment. The cancer treatment I needed gave me 72 staples across my chest to close my mastectomy incisions, allergic reactions to chemo drugs and chemo brain fog that I still struggle with 18 months later, skin burn and internal scarring from radiation, as well as fatigue, insomnia, hair thinning, and painful joints and tendons from the aromatase inhibitor drug I will be on until 2030. There is the ever present possibility that my cancer will come back in some other part of my body; I have learned to live a positive life in spite of this hanging over my head.

What I think needs to be done:
• Women in Canada must be told what their breast density is, and how their density relates to their breast cancer risk. It should be an easy thing to note during routine mammography and must be shared with women.
• Women need to be educated that it’s important to be breast self-aware, including checking for lumps and any other changes in appearance of the breast.
• Women across Canada need to know that they can choose to have a mammogram starting at age 40, but they need to ask for it according to current guidelines.
• Women need to know that there is more than one type of breast cancer, and about lobular breast cancer specifically. It is now recognized as a specific sub-type of breast cancer, and is the second most common type if breast cancer.