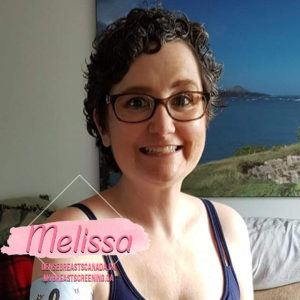 Sometimes during that time of the month I had irritated, burny nipples (which isn’t overly uncommon) but I started noticing that the right nipple stayed irritated longer than the left, and that the skin on my nipple was sometimes flaky. I figured it was just maybe an allergy to something. I went to my family doctor for a regular appointment to refill some meds, and as she packed up to leave the room, she asked me if there was anything else.

Something in my brain kept poking at me and I finally thought "oh what the hell" and even though I felt like an idiot I told her about my nipple. She said "well you're here anyway - let's do a breast exam." So she examined me very thoroughly and I saw a weird look on her face. She said she thought that she felt something inside my breast.
She scheduled appts for me for a mammogram and ultrasound just to make sure there was "nothing sinister going on." I was 39 with no family history so I saw no cause for concern. I had the mammo and ultrasound - the mammo was 100% clear. The ultrasound picked up a small "suspicious" mass and I was called back in for a core biopsy. On Nov 30, 2018 at age 39, I was diagnosed with stage 1 IDC. - one small tumour 1.6 cm in size.

I opted for a mastectomy because my primary concern was getting the cancer out of me, and it was done 3 weeks later - Dec 21, 2018. (Merry Christmas to meeee! ) My pathology came back 2.5 weeks later (holiday delays) and it was determined that I actually had 3 multi-focal tumours (3.8cm, 1.6cm and 0.88cm) - the largest of which was directly behind my nipple which was what was causing the skin irritation. I also had 6 lymph nodes removed and 3 were positive. Stage T2N1 (2B). I was referred to oncology.
At my first appointment at the oncologist, I sat with the nurse first, and immediately burst into tears and the first thing I said was, "how in the hell does a mammo miss THREE friggin' tumours?!" She looked at me, make a small laugh sound, and said "Yup." Because they KNOW. They KNOW full and well within the medical community that mammos are often not effective when it comes to dense breasts.

I feel extremely lucky that my GP sent me for the ultrasound in conjunction with the mammo - otherwise I have no doubt my situation would have been a lot more dire. As it was, I did 8 rounds (16 weeks) of dose-dense chemo, went back in for a full lymph node dissection (9 more were removed - 2 were still positive) then did 25 rounds of radiation and had an oophorectomy in the fall of 2021. (My cancer was 100% ER+). I'm on an AI (Exemestane) and have started Zometa infusions for my bones.
The kicker is that when I finished active treatment, my oncologist tried to send me back to mammos ONLY - no other surveillance. I told him not a bloody chance! Why on earth would I trust mammos as my only surveillance when it showed absolutely nothing the first time?! So now I alternate mammos with MRI's every six months which I'm ok with.

Today I'm very lucky to be a happy healthy unicorn, but it still angers me that mammograms are still being passed off as a "be-all-end-all" method of cancer detection when they are in fact not. Better than nothing? Sure. But for younger women (who most likely have dense breasts) and any women with dense breasts, it should be mandatory that all mammos are done in conjunction with some other test - be it ultrasound or something else.

Sending love and great big unicorn hugs to all of you lovely ladies!