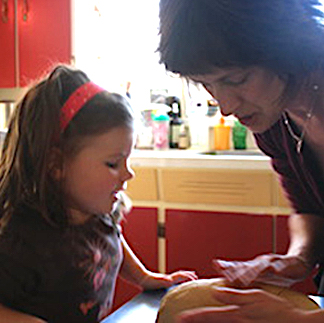 I found a malignant, triple negative tumour in my breast in 2012, at age 49, a few weeks after receiving an all clear letter from the mammography program I’d been examined by yearly since surgery for a large adenoma in 1999. I’d been told once years before by my GP that my breasts were dense but without any explanation of the implications of that – the possibility of increased risk of breast cancer and decreased effectiveness of mammography. It seems like there are a lot of women in the same boat…

I was lucky – I’m a social worker and educator in palliative care and had previously taught breast exam at the medical school in Calgary, so I knew immediately when I touched the lump that it was trouble. My GP, who was a peripheral colleague of mine, and sometimes talked about people as “the worried well”, was away. I’ve wondered if she would have told me I’d just had a mammogram and was worrying about nothing; if so I’d be facing a very different scenario now, if I was alive at all.

For whatever reason, the walk-in doctor took my concerns seriously. She was amazing -advocating with the head of radiology to take another look at my films (the tumour actually was visible because of its location in the axilla when they did), and arranging an urgent ultrasound which, along with core biopsy, confirmed the presence of cancer. By the time of surgery, less than a month later, the tumour was in the process of accessing a blood supply and attaching itself to my chest wall.

The surgeon was compassionate and thoughtful, giving me articles to help with decision making, explaining how to assess a lump’s mobility not only by moving it side to side but also by attempting to lift it away from the chest, and showing me how to do breast self-exam with the entire flat surface of three fingers so as to more effectively sense the difference between the lump and the surrounding tissue. I required a small piece of my chest wall removed, and because the first lymph node in the adjacent chain appeared diseased, an axillary dissection with sixteen nodes removed as well. Fortunately, subsequent testing showed that the tumour (not quite 2 cm) had not yet metastasized.

The next five months involved an aggressive regime of biweekly chemotherapy infusions and immune boosters, followed by a month of radiation treatments – in total fourteen months off work. I am deeply grateful for the care I received, and glad to be alive; and yet I am not left unscathed – I had several years under the care of a hematologist monitoring whether the treatment had left me with leukemia and observing my blood counts which have never fully recovered. I deal with persistent low-grade arm lymphedema and ongoing neuropathic changes in my fingers and toes (numbness and tingling); last year I required another surgery for a small radiation-induced tumour at the scar site.

With so many women believed to have dense breasts, and with my own experience, I feel deeply frustrated by the short-sighted and patronizing suggestion that women rely solely on mammography and not bother with breast self-examination. I have so much gratitude for the work of Dense Breasts Canada for their advocacy and recent success with the BC government agreeing that women should be notified about their breast density and have access to ultrasound assessment as well as mammogram if their GP requests; I hope this change soon spreads across the country. Thank you DBC for all you do!

Misha lives in British Columbia and at age 49, a few weeks after a mammogram found a lump on her own.