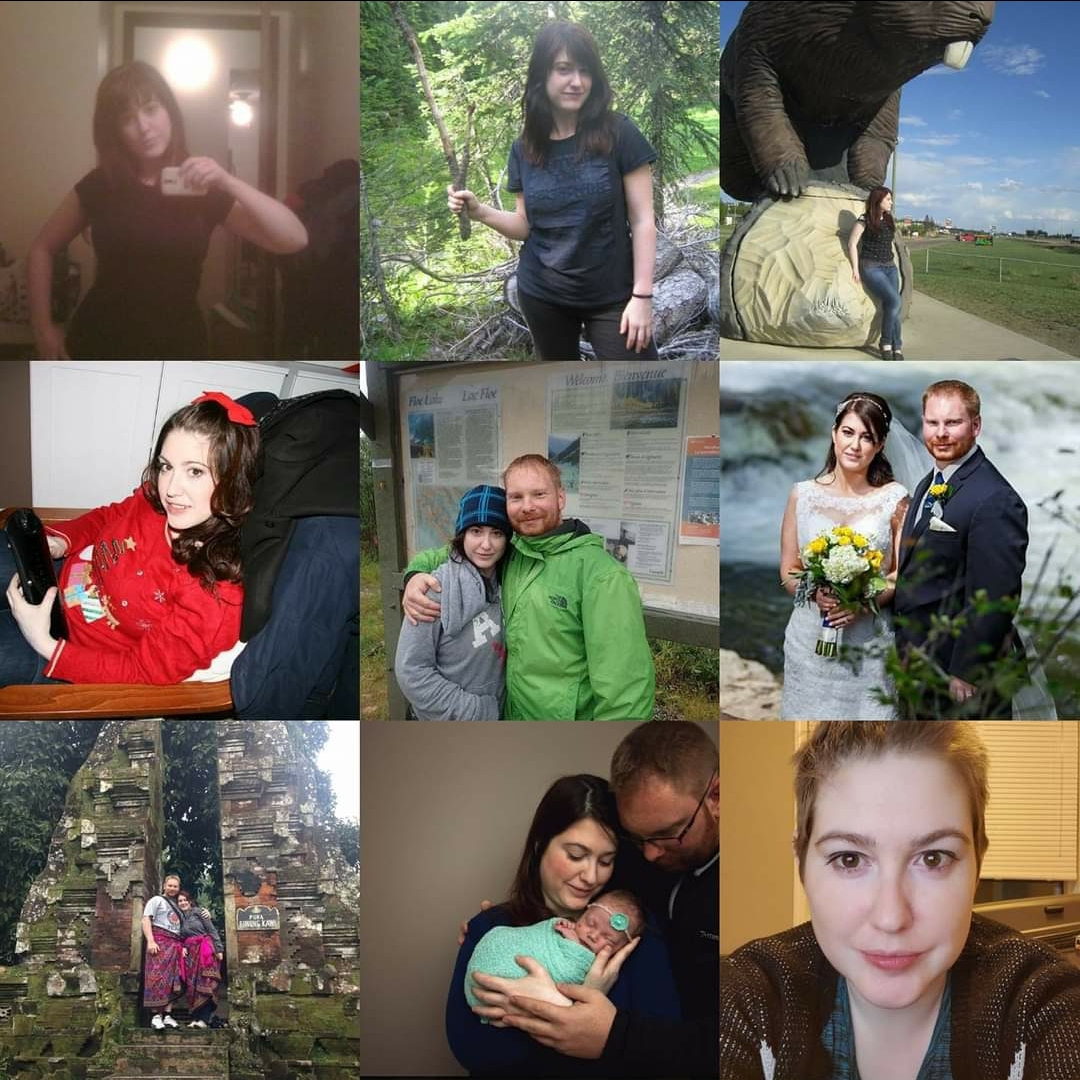 Libby has a lot going on in her life as she deals with Stage 4 breast cancer, but she has taken the time to share lessons she has learned. Her hope is that they can make a difference in someone’s life so that cancer can be found at a more treatable stage. Thank you for all the awareness you raise Libby and for your advocacy.

Growing up I had some limited experience with breast cancer. My mother began getting mammograms in her forties, the norm at the time. At 48, a screening mammogram revealed a 1.8cm triple negative breast cancer. She went through 8 rounds of chemotherapy and a lumpectomy. My mother’s treatment was fortunately a success, and her breast cancer has never returned. After this, we rarely discussed breast cancer, other than my mother occasionally mentioning that her oncologist had told her she would never really be cancer free, a statement my family had scoffed at, at the time.

Seventeen years later, on a brunch date in April 2019, my sister told me that my father had tested positive for the BRCA1 gene. Though this would later prove to be untrue, the funny feeling I got in my stomach reminded me that I should probably get the lump in my breast looked at again. My daughter was 7 months old, and I had finished breast feeding. This was the time my doctor had told me to return to have my suspicious lump investigated.

That conversation set into motion a series of events that has been the scariest, and most trying of my life. The following Monday in April, I drove to the mammogram clinic with my seven-month-old daughter, unaware that for the rest of my life this would be the day that delineated my life into ‘before and after’.

I wasn’t especially nervous as I drove to the clinic and sitting in the waiting room I had no cognizance of what was about to happen. I was mistakenly fearless because I had shown the lump to three doctors, and none of them had indicated that I had any need to be concerned. Each day that I had been told not to worry I took my doctors perception of the situation as truth and pushed the lump to the back of my mind.

Like many women, I had been lulled into a false sense of security by preventive health recommendations in Canada and pink washed awareness campaigns. I believed breast cancer just did not happen to women my age, unless of course they carried a deleterious mutation of a known cancer gene (which I did not). I also mistakenly believed that if breast cancer ever happened to women my age there would be health measures in place, like screening mammograms, and my doctors would have showed more concern. Also, wasn’t breast cancer the easy cancer, basically cured?

Unfortunately, I was about to take a deep dive into a mineshaft of information nobody wants to ever be obligated to learn. Suddenly, I was learning that breast cancer can happen to younger women, and that 20% of women with early-stage cancer experience an incurable metastatic recurrence.(1) I also learned that 70% of breast cancers(2) (including my own) are fueled by hormones, and I would immediately have to enter a medical menopause. Because the hormones from having another baby could cause my disease to progress and become metastatic, I would likely not be having any more children. Of everything I learned, this forced infertility and retirement from having children was the hardest for me. Receiving this information, just as I was falling in love with my child and motherhood, was a punch in the gut.

In Canada, breast cancer screening programs in seven provinces begin at age 50, but about 20% of diagnoses happen prior to this age(3). Women in the 40s are able to request a screening mammogram, and it should be given based on their desire for one(4). Women in their 20s and 30s do not have this luxury and would not be given a mammogram unless there was a significant risk factor, generally the BRCA gene or a palpable lump that a doctor has decided to further investigate. In addition, the Canadian Task Force For Preventive Health Care has recommended against both self-breast exams and clinical breast exams given by physicians(4). This means that many younger women are not receiving breast exams at their physical and not being shown how to effectively examine their own breasts.

Why am I telling you all this? Because, although I cannot prevent you from getting breast cancer – unfortunately science doesn’t know how to do that yet – I can help you potentially catch yours at an earlier more treatable stage than I did.

I made a number of mistakes that led me to discover I had breast cancer later than I should have. The first was assuming it couldn’t happen to me. I now know rare does not mean impossible. Roughly 5% of breast cancer diagnoses occur in women under the age of 40(3). Women have been diagnosed with breast cancer in their 30s, 20s and even their teens. Don’t make the mistake of assuming it can’t happen to you; you don’t need to panic, you need to be aware.

Also, since younger women are not given regular screenings, we need to be vigilant in giving ourselves regular self-examinations and doing them properly. I had not realized how important self-examinations were, or that I should start them well before I reached the age for screening. Until you reach the age of screening, knowing your breasts is basically the only chance you have to find your cancer early – 80% of women diagnosed before forty find their breast cancer themselves(5).

I suggest you start to check your breasts monthly. The slogan ‘feel it on the first’ is an easy way to remember. Watch some YouTube videos on how to give yourself a proper self-exam, or even ask your healthcare provider to show you where you should be feeling. Make sure you know your normal because then you will be aware if there are any changes. It’s also best to look at your breasts in front of a mirror, as this can help you identify other changes, such as a change in shape, or color. Make sure to feel under your armpits too, swollen nodes can sometimes indicate breast cancer. If you see ANY changes in your breasts make sure to schedule an appointment and show your healthcare provider.

Speaking of healthcare providers, ensure you have a family doctor who you can have an open dialogue with about breast cancer and your personal risk factors. Many general practitioners NEVER discuss breast cancer risk with their young female patients. Physicians in Canada need to start having an open dialogue about breast cancer, and not shying away from the discussion when the patients are young. I would also suggest finding a family doctor who is willing to give you a clinical breast exam. Some doctors might be reluctant to perform one because it is no longer recommended, but my cancer might have been found when it was still curable if my doctor had performed one. If your family doctor is unwilling to do these things, I suggest trying to find a new family doctor if it is possible in your area. A family doctor who isn’t interested in talking to you about breast health isn’t interested enough about your well-being.

In addition, if you have concerns about your breasts do not let your doctor turn you away. At my final OB/GYN appointment before having my baby, I showed the resident my breast lump. Although she admitted to also feeling a lump, she quelled my fear and told me to follow up after having my baby and finishing breast feeding! Of course, since she was an expert in women’s health, I believed her and did not worry about my lump until nearly a year later. This mistake on the part of this doctor, and myself, may have cost me my life. I will never know if my breast cancer would have been ‘cured’ if I had found it early, but it will always remain a question in my mind. I hope my OB/GYN, who has been alerted to my terminal cancer, thinks about it as well and exercises more caution with future patients.

Many young women who are eventually diagnosed with breast cancer at a young age tell stories of being turned away by doctors and being told they are simply too young to have breast cancer. Doctors should not be telling women that they are too young for breast cancer, as there are reported cases in women as young as 17 years old. Furthermore, during and after pregnancy women are often told that breast changes are blocked ducts, without any further investigation taking place. Doctors need to understand there is a higher risk of breast cancer during and after pregnancy, and take breast changes seriously during these times. About 30% of breast cancer in young women is diagnosed a few years after having a baby.(6) Concerning breast changes should always be fully and immediately investigated to ensure diagnosis of cancer is not delayed. Never hesitate to advocate for yourself so you can receive diagnostic imaging tests and ensure your breast changes are in fact benign.

Breast cancer is a serious illness. In Canada ~5100 women died of breast cancer in 2020, despite receiving the best treatment possible.(7) Catching breast cancer early does not guarantee you will live a long life, free of the disease, but it definitely increases your chances. Sadly, younger women are usually diagnosed at later, harder to treat stages due to a lack of screening. Younger women are given little information about breast cancer but are required to self-identify that they have a breast abnormality, and then make the connection that it might be cancer. They have to do this without any real information about what a cancerous tumor would feel like, and at a time when their breasts are expected to go through changes and develop lumps and bumps. This is an awful lot for young women to carry on their shoulders. Unfortunately, until the health of young women is taken more seriously by regulatory bodies and healthcare providers, the best we can do is know our breasts, know our risk factors, self-advocate and choose our healthcare providers wisely.