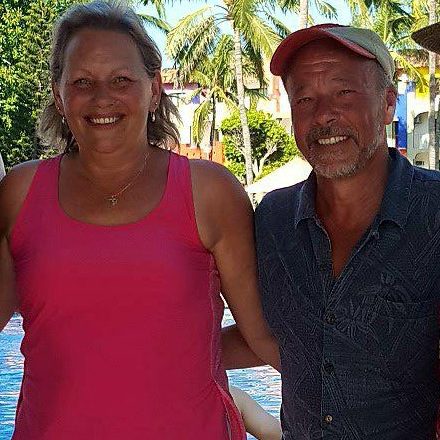 I would very much like to stress the importance of women being proactive with their health, especially when it comes to their breasts. Mammograms are important, but they don’t catch everything, especially if you have dense breasts.

I was diagnosed at age 52 with stage 3A DCIS breast cancer.

I had dense breasts and was told by the technician doing the mammogram that it makes it hard for radiologists to determine what they are actually seeing. My left breast was on their radar for a while, but they kept saying they were cysts. I trusted they knew what they were looking at.

In 2013, sometime around September/October, I began experiencing extreme fatigue, and what I can only describe as “zings” ….like stabbing pain that lasted seconds. I put it down to stress, and that time of the month, and let it be. In March of 2014, I stepped out of the shower, and in the mirror, I saw a “bruise “on my breast. I had read and heard enough that I knew immediately what I was looking at. I prayed I was wrong. I went through all the appointments with doctors, more ultrasound and mammogram. I was sent to a surgeon who has done many mastectomies, and she said to me…” you can wait 6 months for another mammogram, or you can let me do the biopsy right now”, and I opted for right now. It came back positive for cancer. My tumor was 9 cm and covered the whole outside of my left breast. Yet it was missed because of dense breast tissue. I had 8 rounds of some pretty heavy chemo, they wanted to hit it hard, and boy did they. It did the trick though, shrunk that tumor, but, it was still decided because of the size, and the advanced stage that I was still to have a mastectomy, and then do radiation.

Fast forward to 2016. When I started feeling the same things in my right breast, I went to my family doctor who helped me get the appointment I needed for ultrasound. Imagine trying to explain a feeling to people who need proof. I saw a radiologist who refused to do a biopsy, as he said it was too small, and would not do it. I was sent to a surgeon who decided I needed to have another ultrasound, and sent me to a female radiologist…. very lucky for me. She was thorough and saw a shadow she didn’t like. There was no lump, it was a shadow. She did a biopsy on it, and it came back DCIS. The surgeon was giving me my options when I Interrupted and said I just wanted a mastectomy. He agreed, so now to wait again. Once the pathology came back on the tissue, it was determined to be LCIS and not DCIS, so no treatment as it is technically not breast cancer, but, had that come back first, I likely would not have had the option of surgery. How long until those cells do turn cancerous?

I’m hoping that by telling my story, that women will be more proactive, and advocate more for themselves when they believe something just isn’t right, especially when you have dense breasts. Don’t back down just because they tell you it’s nothing to worry about- they are not in your body…. you are. Please take care of yourselves.

Barbara lives in British Columbia and was diagnosed in 2014 at age 52 with Stage 3A cancer, about a year after a normal mammogram.