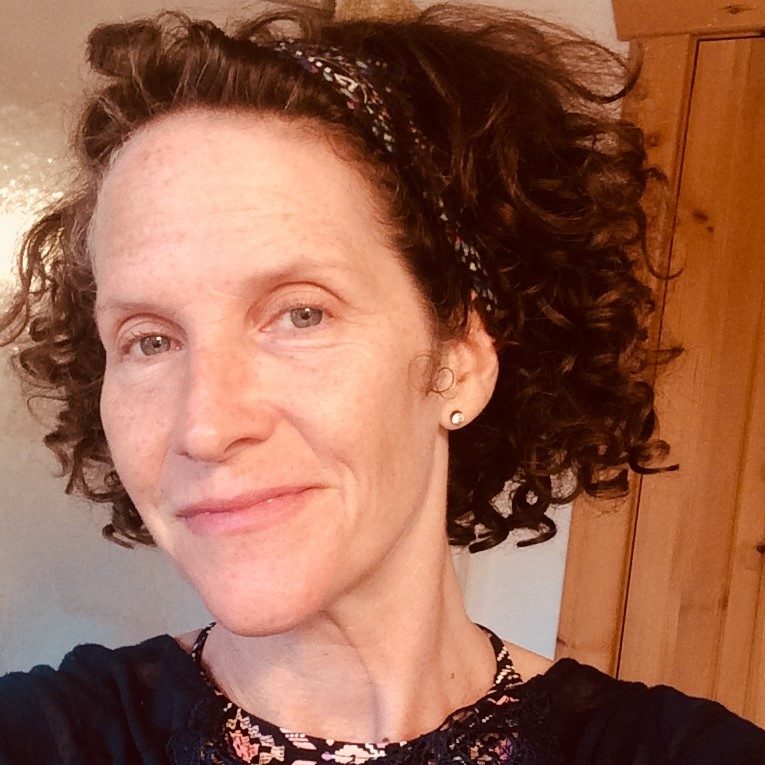 For my entire adult life, I was aware that my breasts were very ‘lumpy’. I was not large chested, and I could feel many bumps and rope like tethers – especially on the right side. The left side was lumpy too, but those lumps felt easier to ‘memorize’. I breastfed on my right side and it was a much bumpier ‘mess’. I was vigilant, asking my GP at each visit what things felt like to him. He always chalked the lumps up to fibrocystic disease, and that was that.

In 2014, my GP sent me in for imaging in response to my concerns about how rope-like my right breast was. At that time, they saw microcalcifications and called me back for a biopsy. Thankfully, the biopsy was negative and I was relieved. One year later in 2015, I felt some round lumps in my right breast and my GP sent me in for a mammogram, as he felt these might likely be cysts (note: no ultrasound was ordered). At that time, the mammogram showed these cysts and was negative for any malignancy; I was once again issuing a happy “phew!” to myself.

Fast forward to late January 2016, and once again I’m at my physician’s office for a yearly exam. He didn’t feel much had changed in my usual breast landscape of bumps and ropes. I should add as an aside here that I’d noted some slight yellow discharge from my right side nipple for months. I forgot to mention this to my doctor when I saw him, so I called the office back 2 weeks after this physical. At that time, the nurse said she’d mention the discharge to my doctor; she called back and said he wasn’t concerned about it.

Four months later – in May – I was in a change room with arms above my head, removing a dress. I noticed the shape of my breast had changed since that January visit to the doctor; it looked larger and more swollen on the upper right quadrant. I was concerned and went back to my GP who agreed that perhaps it would be a good idea for some further imaging. Thankfully, two weeks later I went for a mammogram and ultrasound on the same day.

My mammogram showed nothing – all clear. I walked across the hall and had my ultrasound, after which I received a call 2 days later telling me the news no one wants to hear. I was ultimately staged at 3a hormone positive, Her2 positive ductal carcinoma, with nodal involvement (under 2018 ASCO staging guidelines, I’d likely be stage 2b).

Throughout the years of my imaging, I was told that it was hard to see into my breasts with mammogram, with the proverbial “it’s like looking for a polar bear in a snowstorm.” But at NO point did ANY technician, radiologist, doctor tell me that I should always have additional imaging alongside my mammograms due to my breast density. And I certainly was never told that increased density was a significant risk factor for breast cancer. I learned this all on my own after I was diagnosed. Even AFTER diagnosis, technicians and radiologists would squint at the screens because it was incredibly difficult to see the actual cancer amongst all the supportive normal tissue.

I am convinced that had I received an ultrasound (or MRI) in the year between my biopsy (2014) and my ultrasound that diagnosed me (2016), my cancer would have been visualized. Those microcalcifications were very likely the harbinger of cancer starting to form. These were in the exact same location as the mass that eventually developed. I am disappointed in myself for not thinking to demand an ultrasound be done in conjunction with the mammogram in 2015, and I’m disappointed that the professionals didn’t think to be a bit more careful with me given a) my history of microcalcifications and b) my extreme density.

I also appreciate the monumental costs and resource allocation associated with screening all women; our medical system can’t easily accommodate it. But the cost of cancer treatment (surgery, 8 rounds of chemo, 35 rounds of radiation, Herceptin if you are HER 2 positive, hormone therapy daily for 10 years, Zometa infusions every 6 months) far outweighs the cost of one investigative MRI. The cost to our families and well-being far outweighs the cost of 1-2 extra images. There isn’t a dollar figure you can assign to the kind of trauma this diagnosis brings to a person’s life. EVERY new and unchanging or growing lump or bump or rope or mass must be EXPLAINED. No matter our age. So yes, I fully support the Dense Breasts Canada movement toward women having more knowledge about their own bodies. Toward the medical establishment acknowledging and proactively serving those who are in higher risk categories.

Carolyn lives in Ontario and was diagnosed in 2016 at age 47 right after a normal mammogram.